What Does "This Generation" Really Mean?
by Don K. Preston, D. Div.


This article appeared in the 2022 Fall issue of Fulfilled! Magazine 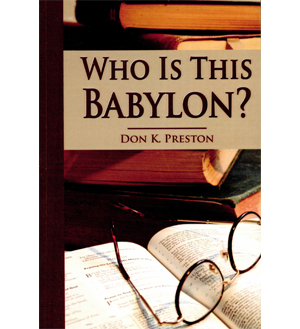 The following was posted on a website in objection to preterism:

“Therefore, behold, I am sending you prophets and wise men and scribes; some of them you will kill and crucify, and some of them you will scourge in your synagogues, and persecute from city to city, that upon you may fall the guilt of all the righteous blood shed on earth, from the blood of righteous Abel to the blood of Zechariah, the son of Berechiah, whom you murdered between the temple and the altar. Truly I say to you, all these things shall come upon this generation.” (Matt 23:34-36).

Notice that it was “this generation” that murdered Zechariah, the son of Berechiah. The problem is that this murder took place 400 years earlier as recorded in 2 Chronicles 24:20-21. This tells us that Matthew’s use of the term ‘generation’ means something different than a mere life span of the people who were living at that time.”

It is interesting that futurists commonly tell us, “The Bible says what it means and means what it says,” and, “we have to take the Bible literally.” Yet, futurism refuses to accept biblical time statements for what they say and normally mean. In fact, futurists redefine an entire vocabulary of words. Soon cannot mean soon. At hand cannot mean imminent. Shortly does not mean quickly. And this generation cannot mean, well, this generation.

Please understand that the only reason why people today look to redefine “this generation” to mean something other than Jesus’ contemporary generation is because of a preconceived eschatology. Because their concept of the nature of the Lord’s coming did not happen in that first-century generation, they redefine “this generation.” Because the Lord did not come—as they perceive that coming to be—shortly, they change the meaning of shortly, at hand, and quickly.

To examine and respond to the objection, thus establishing the correct meaning of this generation, we must examine some facts from the text:

1. Jesus said to the Jews standing around Him in the temple at that time: “fill up then the measure of your father’s guilt.”

2. “All of these things will come upon this generation.”

Therefore, indeed, I send you prophets, wise men, and scribes: some of them you will kill and crucify, and some of them you will scourge in your synagogues and persecute from city to city, that on you may come all the righteous blood shed on the earth, from the blood of righteous Abel to the blood of Zechariah, son of Berechiah, whom you murdered between the temple and the altar. (Matt 23:34-35)

So, the measure of blood guilt would be filled up by “this generation” by killing the apostles and prophets that Jesus would send. This raises some serious questions:

First, if one extrapolates “this generation” to some yet future time, it means that they must believe that in that proposed future “this generation” Israel finally fills up the measure of their sin by killing the apostles and prophets sent by Jesus. I have never encountered a futurist willing to accept the implications of this.

Second, does the Bible tell us when Israel’s blood guilt would be filled up by killing Jesus’ apostles and prophets? Read 1 Thessalonians 2:14-16:

For you, brethren, became imitators of the churches of God which are in Judea in Christ Jesus. For you also suffered the same things from your own countrymen, just as they did from the Judeans, who killed both the Lord Jesus and their own prophets, and have persecuted us; and they do not please God and are contrary to all men, forbidding us to speak to the Gentiles that they may be saved, so as always to fill up the measure of their sins; but wrath has come upon them to the uttermost.

Could language be any clearer? Paul is clearly echoing Jesus’ temple words.

The correlation between Matthew 23 and 1 Thessalonians is undeniable. That correlation proves that Jesus was indeed speaking of His contemporary generation. The fact is that since that generation was to fill the measure of her sin, then it logically follows that, “all of these things shall come upon this generation” refers to that same first-century generation. And there is more—actually, much, much more.

In Revelation, we find the Father—who knew the day and the hour of the end—telling the Son to inform the churches that, “these things must shortly come to pass,” for, “the time is at hand” (Rev 1:1-3). “These things” included the judgment of the persecutorial harlot city “Babylon”—“the hour of her judgment has come” (Rev 14:6f).  So, Who is This Babylon?

We thus have in Revelation every constituent element that Jesus spoke of in Matthew 23, (and by Paul in 2 Thess) as He condemned the Jews for their long history of shedding innocent blood and as He predicted that they would kill His apostles and prophets.

Finally, consider that in Luke 18:8 Jesus said: “Will not God avenge the elect who cry to Him day and night? Verily I say unto you, He will avenge them shortly.” The Greek translated as “shortly” is en taxei, a term that never speaks of rapidity of action versus imminence of occurrence. When one considers this text in light of Matthew 23, 2 Thessalonians, and Revelation, there is no basis whatsoever to change the meaning of “this generation” from Jesus’ contemporary generation and apply it to some yet future time.

For the objection above to be valid, it would have to be proven that Jesus was speaking of some other people, some other generation from that spoken of by Paul and by John. Yet, both Paul and John speak of the same blood guilt, the same perpetrators of the blood guilt, the same victims of the persecution and the same temporal framework for the vindication of the martyrs and the judgment of the persecutors. There is literally not a syllable of support for such a dichotomization.

We have thus established that it was that first century “this generation” Jerusalem that would fill the measure of her blood guilt, and we have proven that judgment on her was to be in that generation. Thus, the objection is overruled!

See my book, Who Is This Babylon? for an in-depth discussion of the avenging of the blood of the martyrs. In that book, I demonstrate that it is exegetically untenable to posit Matthew 23 or any of the Bible prophecies of the last days’ avenging of the martyrs to any other time than AD 70.